A tale of three national parks

After a lovely peaceful evening in Soline, we motored 10nm to the Telašcica National Park where the mooring buoys are free but they charge you around £50 to enter the park! Still, it was a beautiful place to sit out a blow. Ingrid and Liz tried out the repaired kayak. 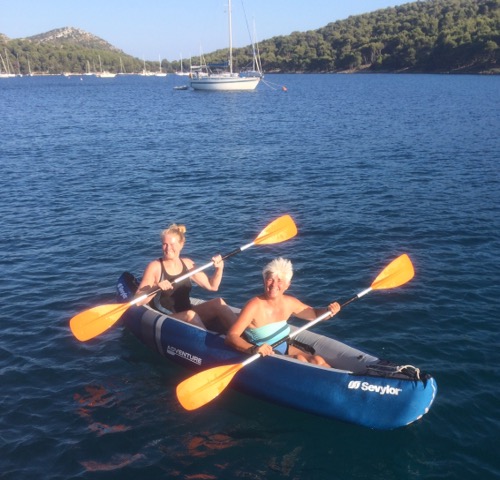 We ate on board and enjoyed the breeze after the searing heat of the day.

Friday morning dawned with lighter winds but enough to sail or so we thought! We were headed for the southern tip of the Kornati Islands, another national park. These islands have been described as looking like a moonscape as it is so barren. Apparently the Venetians stripped these islands of their trees and destroyed the topsoil so hardly anything grows here now. Not so much beautiful as interesting. We ended up motor sailing and the bay we stayed in is called Opat with a small jetty and a fabulous restaurant. Ingrid and Jan Olav treated us to a sumptuous meal there of freshly caught John Dory and lobster. 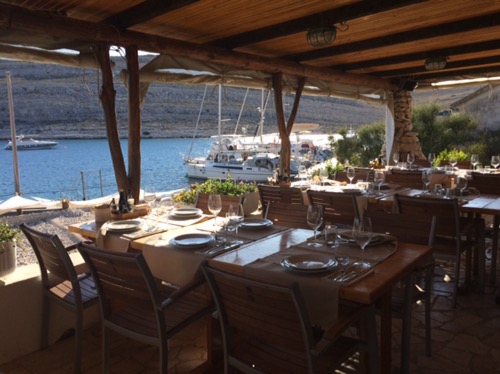 The view from the restaurant in Opat

The views from the top of the hilltop across the Kornati were amazing, even if the climb was a bit steep!

The forecast was showing that a Bora was due in and wherever we were by Saturday afternoon, we would be stuck in for at least two days so we hightailed it out of there towards Šibernik on the mainland. We had a glorious sail with a fully reefed mainsail (made it as small as possible) and a bit of genoa out. We touched 7 knots at times and the waves weren’t too bad as we sailed between the islands. The reason we wanted to head towards Šibernik was to go inland for 10 miles up the river Krka to Skradin as it was the closest we could get the boat to the start of the Krka national park and its waterfalls. It was a lovely meandering cruise up river, under bridges and by lush riverbanks. The wind didn’t abate as we approached so mooring was difficult but with four of us, no damage done to us or anyone else. There were a lot of boats seeking shelter from the bora here including Dream, a 60m super yacht that can be chartered from a mere €370,000 per week complete with a crew of 15!

Skradin with super yacht Dream in the foreground

We decided to eat out after our tiring sail and had an ok meal in one of many restaurants in the village. It’s a huge tourist spot as the national park is one of the top tourist attractions in the whole of Croatia. As a result of its popularity, we took the first ferry to the park at 8am on Sunday morning. It was a good decision as the park was very quiet when we arrived. It seems that it’s a popular destination for locals and tourists alike on a Sunday afternoon as it was teeming with people later.

We took another ferry further up the river to the monastic island of Visovac and then onto the Roški Slap waterfall area. It was stunning with its lush vegetation, insect and river life so we spend our allotted 90 mins there easily! The world’s second hydroelectric dam was built here in 1895.

The hydroelectric dam in the foreground looking down the Krka river

What an amazing place to sit out a bora! It was still too blowy to sit outside in the cockpit when we got back so we went out for a pizza, which was excellent.

Today we said goodbye to Ingrid and Jan Olav as they make their way south to Hvar and Split and we head north to Istria and Pula to meet up with more guests at the weekend.