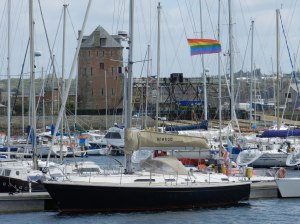 Camaret-sur-Mer is on the tip of the peninsular opposite the entrance to Brest so you can avoid the strong tides that the Rade du Brest generate. The channel into Brest is less than a mile wide in some places so the tide can run fierce. If you need a stop over but don’t need the facilities at Brest, then Camaret is perfectly placed. It is a small seaside town with three small marinas virtually on the high street. It is relatively cheap to stay there at less than €23 a night but the showers are horrendous as they are open to the public during the day. Suffice to say, we only showered there once and kept our crocs on the whole time! 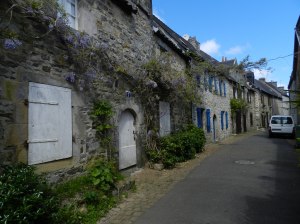 The town itself is quite quaint with many bars and restaurants to keep the tourists happy. All of this is on the main street overlooking the harbour so it doesn’t take long to take in the sights. There is also a fort and a church near to Port Vauban on the end of the breakwater. The church is named after Rocamadour in the Dordogne as pilgrims used to land at Camaret before setting off to reach Rocamadour several days later. The church has a lovely feel to it and has many mementos from grateful sailors.

It is still a working harbour but not to the extent it once was – there are a number of rotting boats on the shingle. 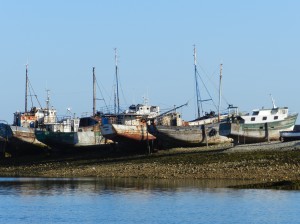