Baiona (or Bayona) is probably our favourite marina of the journey – primarily because of its location. The Monte Real Club de Yates is under the walls of the Baiona Fort Parador, an old Spanish palace that has been converted into an hotel. A truly fabulous setting. It is set on the southern corner of the Ria de Vigo and has an old world charm to it. Once we were moored up, bows to because of the shallowness of the approach, we set off to investigate the Parador and the town.

The ramparts are now part of the hotel and make an amazing vista for an early evening drink. They didn’t even mind us turning up in shorts and t-shirts. It all helps to create the right atmosphere when the sun is out, there are clear, blue skies and the temperature in the mid 20’s.

The town itself dates back to 140BC but is more famous for being the first port of call to receive news of Columbus’ discovery of America when the Pinta arrived in 1493. It has also repelled many attempted boarders in its time, including a certain Francis Drake in 1585. 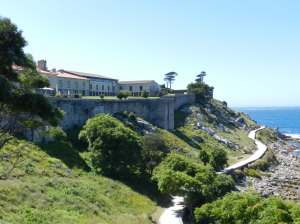 After a drink and a wander around the hotel, we went back to the boat to freshen up before having a delightful meal in the marina clubhouse of octopus, pimientos de Padron (our staple now!) and then a selection of grilled fish. All washed down with a lovely bottle of Albariño.

After dinner, we walked around the old town with its winding alleys and bustling night life. There was even a free open air concert with flamenco dancing in one of the squares that was being watched by locals and tourists. The town quadruples in size during the summer – we were there in July – from its base of 10,000. Despite needing to leave relatively early the next day, it was hard not to stay up late and savour the atmosphere.