We were so delighted with the small amount we saw of Corsica in 2012 (see separate page) that we spent two weeks circumnavigating the island clockwise in June 2013. We had great weather as you can see from the slideshow above although the winds were varied to say the least! 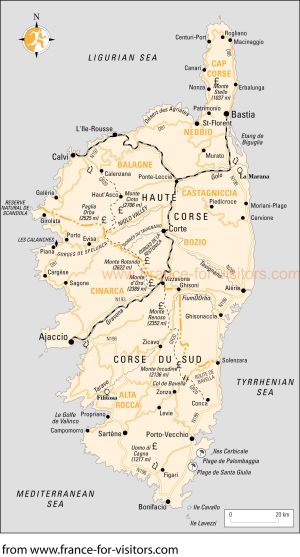 Liz and Jo motor sailed overnight from Alghero to Porto Pollo, arriving at 0600 hours. We chose Porto Pollo as it was on the south western corner, below Ajaccio and had mooring buoys to pick up so we didn’t have to worry about the anchor setting and just go to sleep! Our original plan was to then go round to Ajaccio later that day to pick up our first two guests but we decided to chill on the boat and get up early the following day to travel the 20nm north. Ajaccio doesn’t have a lot to recommend it other than being Napoleon’s birthplace (1769) and he only came back twice once he had left it aged 7! Still, with being moored in the old port, it did mean that we could easily walk into town and see what sights there were and then come back to the boat for pre dinner drinks. There were also a lot of harbour-side restaurants to choose from. Ajaccio only became the island’s capital in 1811 once Napoleon was crowned emperor and is was only formally annexed to France in 1780.

There are lovely bays and coves around Corsica and they don’t turn them all into marinas like the Italians do so we could bay hop much of the way round. The next stop of note was Girolata on the west coast about 40nm north of Ajaccio. Overlooking the Bay of Girolata, is a Genoese tower that was completed in 1552. The place itself can only be accessed by sea and is very popular so boats are on mooring buoys fore and aft so that they don’t swing into each other and you can get many more boats in. The bay is delightful with cows wandering along the beach and many small stalls selling bits and bats (and even ice!). There is a bar overlooking the bay where we had to have a sundowner and bask in the gorgeous June weather.

Then it was onto Calvi, a medieval fortified town, that looked very imposing from the sea. There is a marina there as well as mooring buoys so, naturally, we picked up a mooring buoy and had a wonderful view of the town from the boat. The French Foreign Legion are based there so there were many soldiers around looking very smart in their uniforms as well as providing eye candy for the boys! From Calvi we continued our clockwise circumnavigation with our next nice stop being Saint Florent on the north coast. A nice enough little town where we were able to fill up with water and gain shelter from a forecasted gale (that didn’t actually arrive!). Over the top of Corsica to Macinaggio where  we anchored in the harbour but stayed on board.

Our next stop was Bastia, the original capital of Corsica and it looks like it! Whilst we moored in the marina that was packed and seemed to only have one free berth halfway down a channel, the old port is where the action is. We arrived in time for the celebrations of their patron saint, St Jean Baptiste so the whole town appeared to congregate on the ancient harbour walls to watch the fireworks and bonfires. Afterwards, the town was bustling with people until the early hours. Great fun. The next day we spent some more time looking around the old town that had been ravaged by time and the relentless Mediterranean sun. Next stop of note was Porto Vecchio on the east coast that is a huge natural harbour. Lots of small anchorages but we had 30 knots of wind blowing so anchored just south of the commercial port. The town itself has been inhabited since the 16th Century with Genoese architecture to prove it. It was also one of the stages for the 2013 Tour de France bike race.

From there we continued to Rondinara, where it was very crowded compared to when we were there in October 2012 but still delightful. Very buzzy and we probably got one of the last spots! This time the weather was settled enough to go over the small islands on the SE corner of Corsica. We had a lunch time stop in Cavallo, which is where a number of millionaires have their summer homes. It is very flat and low lying so can only be approached in settled weather. Onwards towards Bonifacio for the evening, it never fails to please. See the previous page on Corsica 2012 for more detail.

The Corsican flag of a Moor’s head symbolises the emancipation of Corsica and taken from the Arms of Aragon and first used by Corsican rebels in the 18th Century.