The Morbihan region in the south of Brittany is  a beautiful part of France with outlaying islands such as Glenan, Belle-Île and Île de Groix. Belle-Île is where the rich and famous spend their summers and lies 15km offshore from Quiberon. Before we reached there we stopped at the Îles des Glenan where the famous French sailing school started after the Second World War. They are a glorious collection of low lying islands with white beaches supposedly made from decayed coral. The sea was turquoise and it was a glorious afternoon. There are very few facilities on the island and certainly no WiFi or 3G! 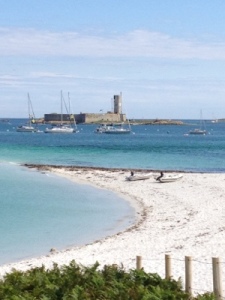 The weather wasn’t great when we sailed from Glenan to Port Tudy on the Île de Groix. The entrance to Port Tudy is very narrow and it was very busy with a number of school boats coming at dusk. There really wasn’t room but with the next couple of days likely to be bad weather, you couldn’t blame them for squeezing in! We spent the next two days exploring the island on bicycles. 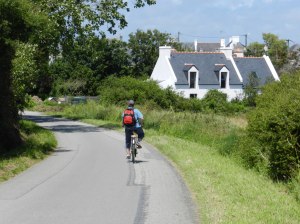 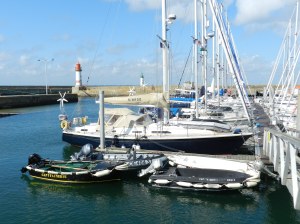 The region also boasts an archipelago called the Golfe du Morbihan where the currents run fast and there are many islands that can only be explored by boat. Coming into the Morbihan you encounter fast tides as the Golfe is 50 square miles of sea and islands but with an entrance of just a half of a mile wide. On a Saturday afternoon in June it felt like Piccadilly Circus with motor boats, ferries, yachts and canoes all coming at you from different directions with no speed limit. It made the Solent seem quite sedate in comparison. Also, as it was Springs, low tide was just 0.3m so you really had to watch your depth as the shore shoals very quickly in places.

We moored in a bay off the Ile d’Arz for the night. Unfortunately, in picking up a mooring buoy we managed to break a boot hook in half! 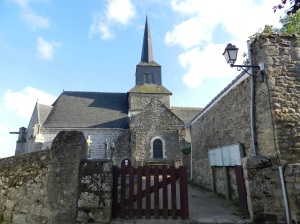 We took the dinghy to the island and walked into the town. We found a nice bar for an early evening drink and a quaint church.

We stayed there the next day as we had a low front come in with 30+ knots but felt pretty safe on the mooring buoy.

We then motored the few miles back out of the Golfe to Port Crouesty so that we were not constrained by the fast flowing tides. It has nothing to recommend it on a wet and windy day but the marina  is huge. In fact, there were 5 marinas there and could accomodate hundreds  of boats. We were able to buy a new boat hook and a new mainsheet block as well as restock food and fuel for our Biscay crossing so it was worth the visit.

From there we went to Belle-Île, the rich people’s playground as we had heard that it was very pictureque and quaint. As we were about half way to the island, a fog bank rolled in cutting visibility to less than half a mile. As quickly as it came, it cleared.

Belle Île is about 15 miles from Crouesty and is famous throughout France. Le Palais is the main port where the ferries come to and mooring up is an interesting experience! You basically have to moor stern to the harbour wall with a rope through chains hanging down and then attach the bow to a mooring buoy. All of which can only be done with the help of the marina staff as there are already boats attached to both chains and buoys. You then need to use the dinghy to cross the harbour to get to town. You can walk round from the harbour wall but it is a long way and you still need to use the dinghy to get off the boat. 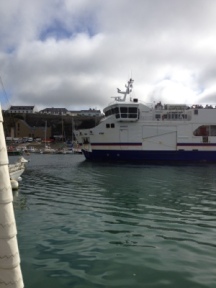 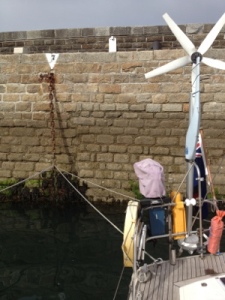 Whilst the engine was being replaced, we visited Auray, Vannes and St-Cado in the area. Click on the link below for more information and photos.