We left Menorca on Tuesday evening for the 200 mile, 40 hour crossing to Sardinia. We managed to sail pretty much all of it apart from a few hours on the first night as the wind died. The swell built up during the day on Weds so Weds night was uncomfortable when off watch but we still managed to each get some sleep. The passage was uneventful as we only saw a handful of other boats – all container ships or fishing boats. We are now the only boat on a mooring buoy (free) in front of some Roman ruins in the Golfe Di Oristano, just behind the cape of San Marco. Very pretty but a bit in the middle of nowhere as this part of the bay is deserted.

Pictures of Jo sleeping in the saloon that has been converted to a sea berth, sunset on the passage, the Roman ruins we are moored by and the places we visited in Sardinia. 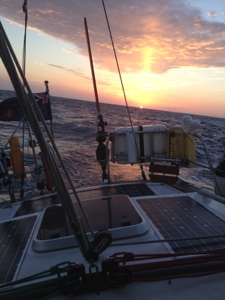 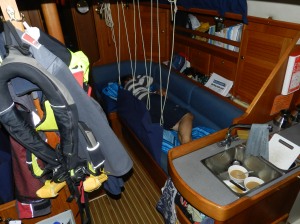 Like Loading...
This entry was posted in News and tagged 2012, Italy, Med, Roman, Sardinia. Bookmark the permalink.

1 Response to Safely in Sardinia