We left our mooring at San Marco later this morning to sail south to Portoscuso on the south of the island and not far from Cagliari, the capital. We sailed off our mooring and thought we would have a nice sail but the wind died completely so we ended up motoring all day.

We called in a bay called Porto Flavia as we had been told that it was dramatic. It certainly was with sheer cliffs and clear water. We then continued to Portoscuso where we are actually in a marina for the first time in a month! Very odd feeling but at least we can clean the boat as she is salt encrusted following our passage over from Menorca as well as stock up on fresh food as we are somewhat depleted. The cost here is around €40 a night even in Sept so we won’t stay here long and I suspect we will be anchored tomorrow night.

Liz made more bread today so I have included a picture of it along with Porto Flavia as Portoscuso doesn’t have much to commend it! 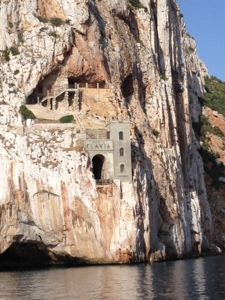