The battery charging problems have all been sorted thanks to Kostos in Kalamata marina. We stayed Saturday night to ensure that we were fully charged and set off around midday to join our friend, Jaco, on Dorothy at one of his favourite coves. It was about 25nm away so we arrived around 5pm. It is a little known anchorage west of Kalamata and back towards Methoni. Lovely sandy beach, crystal clear water and just our two boats.

On the way round Liz caught not one but two fish! We thought at first that they were Bluefish and then wondered if they were, in fact, baby tuna. 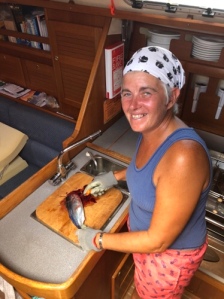 We spent the evening on the beach and barbecued a fish that Jaco had caught and frozen a few days before. 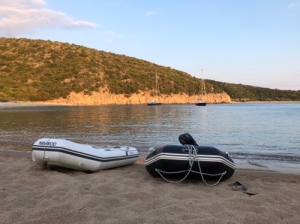 A gorgeous evening only spoilt when a small catamaran came in just before dusk and anchored between us and our boats! Still, we couldn’t begrudge them sharing such a wonderful spot. 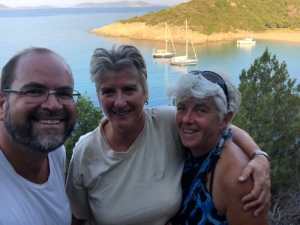 Jaco, Jo and Liz with Nimmie and Dorothy behind

After an early morning swim and walk to the headland to try and get over our hangovers, Dorothy and Nimrod parted ways. Dorothy back to her home base of Kalamata and Nimrod eastwards towards Porto Kayio and unknown territory. Our anchorage at Porto Kayio on Sunday night was unremarkable and felt more like a safe stopover rather than the ‘chic’ destination it had been described as.

The Peloponnese is really quiet in comparison to the Ionian with very few (if any) charter boats so the bays are less crowded and you can also free anchor without taking lines ashore. Much easier when you sail short handed. The weather is still warm hitting the 30s during the day but a bit cooler at night so making it easier to sleep.

The wind had turned to the NE during the night so there was some fetch in the bay that made sleeping uncomfortable so we got up earlier than planned and were on our way before 8am. We had around 25nm to make to get to the foot of the third finger of the Peloponnese peninsular to the island of Elafonisos where yachts wait for a weather window to round the next headland, Ak. Maleas. We were sailing with just the genoa (front sail) up and making over 6 knots in a building sea. By midday, the wind gusts were over 30 knots and we knew it would only get worse as the afternoon sea breeze kicked in. We arrived at Sarakiniko bay around 1pm to find about 5 other boats all anchored off the beach. The wind in the anchorage gusted 34 knots during the afternoon so one can only guess what it would have been out at sea. It’s a beautiful place with a long sandy beach, beach bar and taverna but we haven’t been able to leave the boat yet as it hasn’t stopped blowing a hooley since we arrived. Interestingly, no one else has left their boat either! Hopefully, today we may get to the beach as we know the anchor is well dug in and the forecast is for slightly lower winds. However, it’s currently gusting over 30 so we may not be going anywhere!

Dinner was on board and, of course, we had the two fish which we now think may be Med mackerel. Delicious baked in the oven. 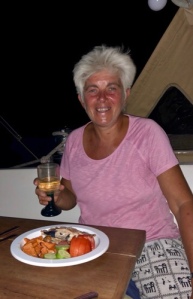 We are expecting to be stuck here for a couple more days at least until the blow and the sea to the east of us calm down. 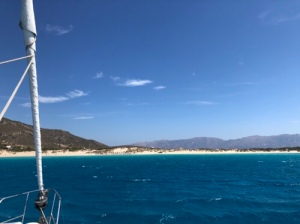 1 Response to Stuck in Elafonisos