Having spent several days on Hvar and the Pakleni Islands, it was time to move on to the island of Vis, about ten miles south as there was a southerly blow coming through. As it was a Friday (so no charter boats) the town quay was virtually empty but we opted for a mooring buoy at half the cost. After a quick food shop, Loui and Kate decided to wander around town whilst Liz and I walked up to Fort George on a nearby hilltop. It had great views and even better cocktails so we were both happy.

The next morning, we decided to move to the town quay as there was a storm due overnight and rain forecast for the next two days, which would not have been much fun for our guests if they’re stuck on a mooring buoy. And, my, did it rain but at least Nimmie had a good wash. There was a temporary respite in the weather on Saturday afternoon so we hiked across to an old submarine bunker, dating back to Tito’s era and part of the set for the James Bond film “The world is not enough” followed by the now mandatory sundowner at Fort George.

Submarine bunker with prayer flags in it!

Vis was a partisan stronghold during WWII and also Tito’s HQ up until 1980. The island itself wasn’t opened to tourism until 1989.

Sunday was a lazy day doing admin and generally chilling whilst the rain hammered down. Liz, of course, couldn’t sit still for too long so she went for a walk to a British cemetery that dates back to the Napoleanic wars, hence the naming of Fort George, in between showers. She even found time for a much needed haircut! We had originally hoped to go across to the island of Bisevo to visit the Blue Cave whilst the charter boats were back in port for changeover but the weather had conspired against us. Instead, we slipped our lines at 0545 on Monday morning to go the 12nm to the cave. We picked up a mooring buoy there at 0815 so that we could get one of the first water taxis into the cave. What an amazing sight. We had the boat to ourselves so Kate was able to take as many photos as she wanted. Brilliant. 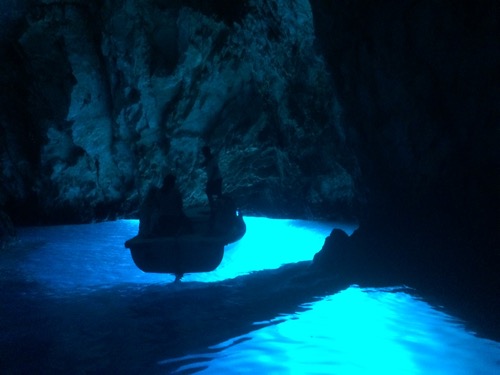 The Blue Cave really is that blue!

We then moved on to the island of Budikovac, just south of Vis. There are actually two islands, Mala Budikovac (meaning small) and Veli Budikovac (meaning big). There was turquoise, clear water between the two of them so we moored there for the night. 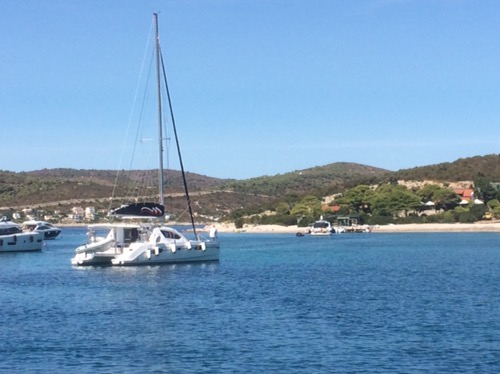 The Green Cave was on the nearby Ravnik island so we took the dinghy there to have a look. For the pricely sum of 50 kuna each, we were allowed to row our own boat into the cave. You can swim in there but we decided that it was too cold. None of us felt it was a patch on the Blue Cave. 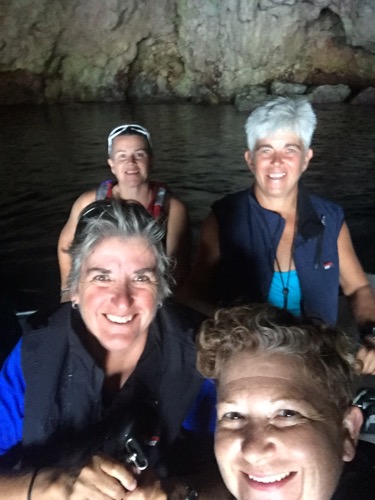 Inside the Green Cave

Back on board, we had a BBQ and watched the moon come up. What a lovely day.

Liz had read that there was a gorge nearby at Stiniva where you can moor up so on Tuesday we went to have a look. It was pretty busy with charter and day tripper boats so we moored up in an adjacent bay (Vela Travna) and walked round. The walk down from the top was more akin to mountaineering than a gentle hike as stated in the guidebooks! Still, the view was spectacular.

Stiniva Gorge from half way down!

Again, we ate on board and decided to dinghy round to the gorge early in the morning when it would be quieter. We set off around 0830 and got there before the day trips had arrived. It was amazingly clear with a lot of fish and fauna.  The snack bar there cooked us breakfast, even though it wasn’t on the menu.

A lovely morning followed by a great afternoon in our next cove, Stončica, which actually has a sandy beach as well as the mandatory turquoise water. We were lucky to be able to pick up a mooring buoy right by the swimming area so spent the afternoon swimming and chilling although it does seem to get quite chilly (20 odd degrees!) once the sun goes down. We were then treated to a meal in the beach restaurant by Kate and Loui as it was their last night with us. 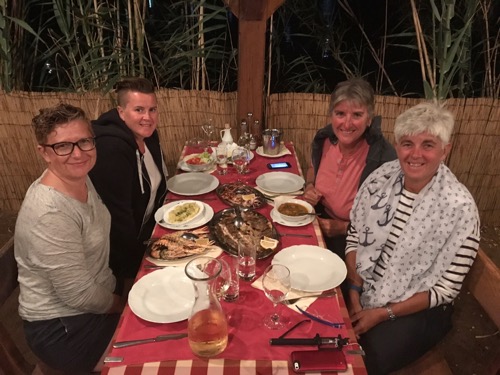 It was a very early start for us this morning as we needed to get Kate and Loui to Vis Town to catch the 7am ferry to Split. We left our mooring at 0515 to make the 4nm journey.  As we came into Vis harbour, we realised it was chock o’block as 30 yachts that form ‘Yacht Week’ were in town. Luckily,  there was a mooring buoy free near to the fuel station so we were able to dinghy our guests and their luggage ashore. We spent the rest of the day food shopping and going on a wild goose chase to refill our camping gaz bottle. We decided to stay here all day as we were tired and the strong winds would have been on the nose and a hard slog to move further south towards Dubrovnik (where we need to be by Sunday).  We’ll attempt that tomorrow!