We haven’t managed to get back to the boat since we ‘winterised’ her at the end of September. Life in the UK has got in the way but she has been admirably looked after by Peter, our caretaker. We have given him a list of jobs we needed doing over the winter and look forward to going out in a couple of weeks to catch up. In the meantime, it became apparent in September that our tender had an irreparable leak. It was probably our fault leaving her in direct sunlight during the hottest time of the day in Favignana in June but I suspect also due to the fact that we have been using her in the Med for the last 5 years. So, we bit the bullet and ordered a new one that is half the weight and, hopefully, with better glue!

The new tender, 3D Twin Air for those who need details, was duly ordered in the UK and delivered to Peter in Malta a few days later. He transported it on his scooter from his offices in Ta’xBiex to the boat. I know it’s light and packs down small but I’m not convinced it was that sensible an idea! 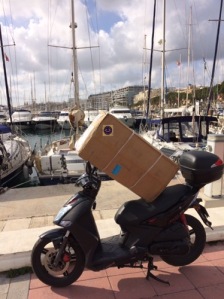 Like Loading...
This entry was posted in Equipment, News and tagged 2017, Equipment, Maintenance, Malta, Med. Bookmark the permalink.