An interesting day out

It is 7 months today since we first left the UK.  Most of the time, we have been pretty lucky with the weather but it seems that this last week the weather gods have turned against us. The high winds have continued only calming down this afternoon (Saturday) so we have not yet been lifted out and the winds return tomorrow evening for the rest of next week  so there isn’t even any point staying here any longer than planned. The lift out will now have to happen in the Spring but the jobs weren’t urgent just needing doing at some point.

Although we had high winds, yesterday was bright and sunny, if a bit chilly, so we decided to hire a car and explore the interior of Sardinia as the only place we have been to that wasn’t coastal was Sassari and that didin’t have much to commend itself. We took the advice of the hire car manager and went northeastwards towards Tempio Pausania high up in the mountains. The roads in Sardinia are mainly narrow and windy although they call their main roads “Superstrada” but  I think they are being ironic with the  number of potholes in them! Italian cars are also not manufactured with a speedometer or indicator lights as they seem not to know what either of these are for. 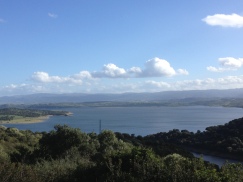 After about an hour of climbing and 40 km later, we came across a gorgeous lake, Lago del Coghinas.

Tempio itself is a delightful town, reminiscent of the medieval towns of Brittany with its granite houses, paved streets and small alleyways. It is clean, tidy and well cared for – something that can’t be said for many places in Sardinia.

The Pisan Bell Tower at Tempio

The paved streets of Tempio

After leaving Tempio, we then drove through a lunar valley. Well, that’s what the guide books call it but it is an amazing valley full of large boulders that look as if they have just been dropped there by a giant. So different to the rest of the country.

We then made our way to Aggius just north of Tempio and towards the coast. This was a smaller version of Tempio set into the rocks and we sat in the car and had our packed lunch looking over the valley.

We drove back towards Alghero along the northern coast to see what we had sailed past a month ago from a different perspective. We saw some lovely beaches and restaurants that were closed for winter but seemed well worth a visit in summer. 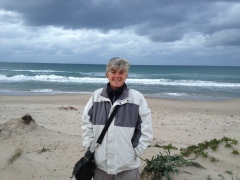 As we had the car for 24 hours, we drove south this morning towards Bosa, again climbing into the mountains and looked down onto Alghero and across to Capo Caccia where Neptune’s Cave is and where we have anchored overnight.

Alghero with Capo Caccia in the background

4 Responses to An interesting day out