We awoke to drizzle and mist in Cedeira harbour but the anchor had held well and we were visited by yet more dolphins but alas it was too murky for photos. The wind was non existent so we motored the 30 miles to La Coruna,  the capital of Galicia.

We are in a marina in the centre of town with the sun shining and about 26 degrees at 1930. It looks a lovely old city that we intend to explore over the next couple of days. We had booked an engineer for the following day (Monday) as we needed the oil filter on the new engine to be changed as we had clocked up more than 50 hours. We would normally do this ourselves but the new engine had the oil filter painted over with green marine paint so we didn’t want to damage anything and assumed he would have the right tools. He duly arrived at 9am the next day and took him three hours as it was a devil to remove. Made us feel better that we couldn’t get it off.

La Coruña is a very pretty town with the marina in the middle of it. It makes life so much easier when you need to do a big shop or buy more camping gaz if you don’t have to trek for miles, although it does keep you fit!

La Coruña is a major stopping off point for many boats crossing direct from the UK or NW France on their way down to the Med or the Canary Islands. Consequently, the marina felt like the UN with so many different nationalities amicably berthed next to each other. The city itself is very prosperous and obviously used to be a  trading centre with a magnificent main square that celebrates the unsuccessful siege of 1589 by the English when Maria Pita led the defence.

There are many small alleyways off this square filled with restaurants and bars. The houses on the front all have glassed in balconies to protect them from the brisk Atlantic air. 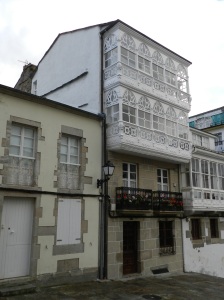 We ate out in a family restaurant one night and made sure we had traditional Galician food of “racions” of chipirones (squid), vieiras (scallops in St James’ shell) and almejas marinera (clams). These are  portions bigger than tapas but smaller than a main course that are great for sharing.

One of the oldest working lighthouses in the world is at the entrance to La Coruña harbour  as there has been a lighthouse on the same spot since the 1st Century AD.