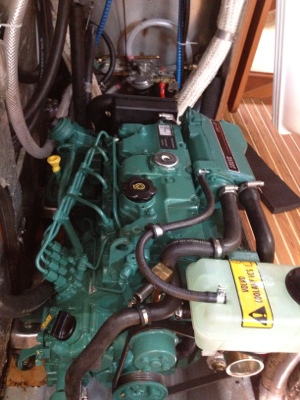 So, at 1100 today we were moved by the friendly marina staff to the slipway so that the new engine could be lifted into the boat. Before this could happen we had to move a boat that had rafted up against us on Saturday. When I explained to the skipper that we would need to move on Monday morning, I was greeted with a Gallic shrug. Luckily the marina staff moved the boat for us as the skipper had left Sat eve.

Once the engine was on board, the mechanic, Jean Claude, promised to return at 1400 as it was now approaching midday and of course nothing comes between the French and their lunch! However, at 1430 he arrived back and with lots of huffing and puffing mixed with the occasional ‘merde’ the engine was in the bay. Now the only problem was that the engine wasn’t tall enough to match up with the propeller shaft. At that point we thought that all work would stop but we were wrong. He got his colleague to make some blocks to put under the feet and continued. He worked through to 1830 and is coming back tomorrow. It should all be completed in the next day or so and then we will be able to change the blades on the propeller and also check the rope cutter. The cutter cuts through anything that might get wrapped around the shaft which is essential in coastal waters with fishing nets and lobster pots lurking just under the surface.

Currently, looking good for us to do a test sail before the end of the week and to get away over the weekend but we will see.

2 Responses to New engine on boat!