We were sad to see our friends depart a week ago today (Tuesday). We quickly did a food shop as we knew we needed to get off from Paros and make our way north towards our winter berth of Lavrion as we only had a small window due to the seemingly constant strong north winds. We broke the 80nm journey half way at Stefanou on Kythnos as we knew it was a safe anchorage. It was a hot, airless day and we had to motor the entire way so a swim once we were anchored was a wonderful way to end the day made more interesting by snorkelling around the boat wreck at the head of the bay.

The next day we set off early as we had another 40nm to do to get to the Petali Islands just off the southern end of Evia. We managed a mix of motoring and motor sailing (for a change) but we found that our water maker wasn’t working. We generally ensure we have at least 250L of water spare so we weren’t too worried but it was weird to suddenly think about where we could fill up. The membrane had become blocked so the only thing to do is to get a replacement – not something that can be sent out at short notice and we only had another two weeks on the boat. We arrived around 4pm and anchored in a bay called Vasiliko on Nisos Megalo, part of the Petali Islands. It was a beautiful bay with golden sands, rock arches, turquoise water, lots of different fish and goats on the hillside. A lovely way to spend the evening celebrating Liz’s birthday. It was so lovely we decided to stay for a couple of days. The Petali Islands were once the summer retreat for royals and celebrities and are now owned by Claude Picasso, son of Pablo Picasso.

We wanted to explore more of the island of Evia so we continued north west with the northeasterly breeze helping us along. Evia is the second largest island in Greece (Crete being the largest) and is over 100 miles long and is accessible by road from the mainland at its central point, Chalkis, which is also its capital. Evia feels somewhat off the beaten track and visited mainly by Greeks. It’s also not on any yacht charter itinerary so the bays and town quays are quieter, even in August, which is always a bonus! Anyway, we sailed as far as we could before going into the small town of Panagia at the top of a very long bay. It took us an hour to get all the way up to the top of the bay as wind and waves were against us. We were experiencing 25 to 30 knot gusts and, of course, it was at the upper end just as we were taking the sails down! As we arrived, the wind abated a bit and we motored up onto the town quay. We only had to pay for water and electricity so we filled our tanks and washed the salt of Nimmie with gusto. Panagia is a lovely place with only 100 or so permanent residents but hundreds more pour in from the daily ferries. 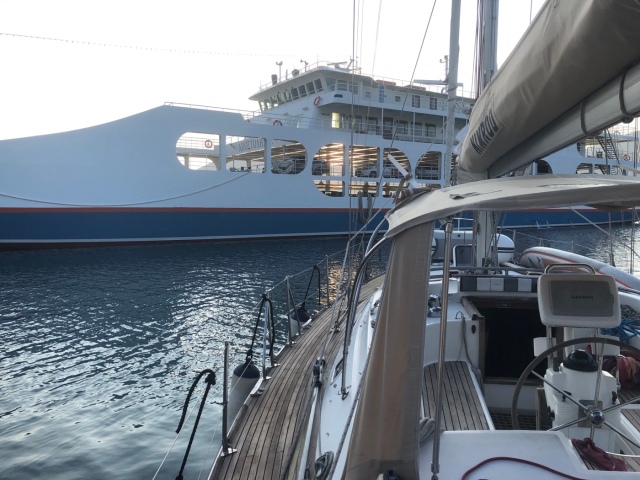 The ferry quay was quite close in Panagia!

It had a good supermarket, a butcher whose shop was over the meat restaurant he supplied, a public beach, bars and restaurants. Perfect for a stay of a few days. It was Friday night by now and we found out that the bars didn’t close until two in the morning so earplugs were required to get a night’s sleep. We left Panagia at lunchtime on Sunday to continue 30nm northwards to the capital, Chalkis, as we wanted to hire a car to see the island properly. We only managed to sail for an hour or so when the wind died as the middle part of the Evia channel is well protected by the surrounding mountains.

We went under the new road bridge on the outskirts of Chalkis. It doesn’t seem to matter how high you know the bridge to be (36 metres in this case), you still worry you’ll hit it! We arrived around 6pm to find that the marina was full so we anchored off. The town itself is not pretty and the sea is very shallow with its own eddies and currents. It’s more like a swamp than a sea so it also had killer mosquitoes. Liz was bitten several times before we had even finished sorting the boat out after anchoring so we had kind of decided we didn’t like the place. We also weren’t comfortable leaving Nimmie at anchor for two days whilst we explored so we abandoned our plans and came back south the next day using the northerly winds to have a cracking sail back down. This time we went back to the Petali Islands but anchored in a different bay on Nisos Xero. Again, we had golden sands, turquoise water and even spotted some coral.

That brings us to today. We thought we would try and get into the other main town, Karystos, on the south of Evia and hire a car whilst we wait for a weather window to get back across to Lavrion. Another ‘lively’ sail with 30 knots of wind and building seas but once we entered the harbour all was much calmer. We just had 18 knots of cross wind to content with as we moored up. We will now stay here for a few days, tucked safely in against the strong winds forecast and try and find some transport to see this part of the island (all the cars have apparently been reserved although to be fair, there is only one car rental place in this very sleepy town!).

Like Loading...
This entry was posted in News and tagged 2019, Aegean, Cyclades, Greece, Med. Bookmark the permalink.