I’ve nicked the title from a friend who commented on a picture we posted – all will become clear later.

We arrived in Greece last Sunday evening and it was 2330 by the time we got to our hotel in Piraeus. We had decided to spend three nights in a hotel rather than on the boat as the boatyard is a bit basic to say the least. This way, we were able to freshen up in a clean shower after spending the day on Nimmie. So, on Monday morning we caught the ferry from Piraeus to Paloukia in Salamina and then jumped in a taxi for the 10 minute taxi ride with two large bags, rucksacks and holdalls. Some of the work had been done but not all completed. Just as well we arrived a few days before we wanted to have her launched.

Over the next two days we set about doing the various jobs required to get her launched but we hadn’t reckoned on either Greek bureaucracy or sparrow chicks. The former meant they had “lost” my online payment for the new Greek Cruising Tax that came into effect on May 9th and you only had 10 days grace to pay it. We were safe until we entered the water (and the authorities are being very keen to ensure people have paid it) so several hours of Wednesday were spent waiting in line at a bank to pay our €300 and hope it got credited to the correct account. The latter, sparrow chicks, was also a delaying factor. Local sparrows had built a nest in our boom and the eggs had hatched a few weeks ago according to our neighbour. 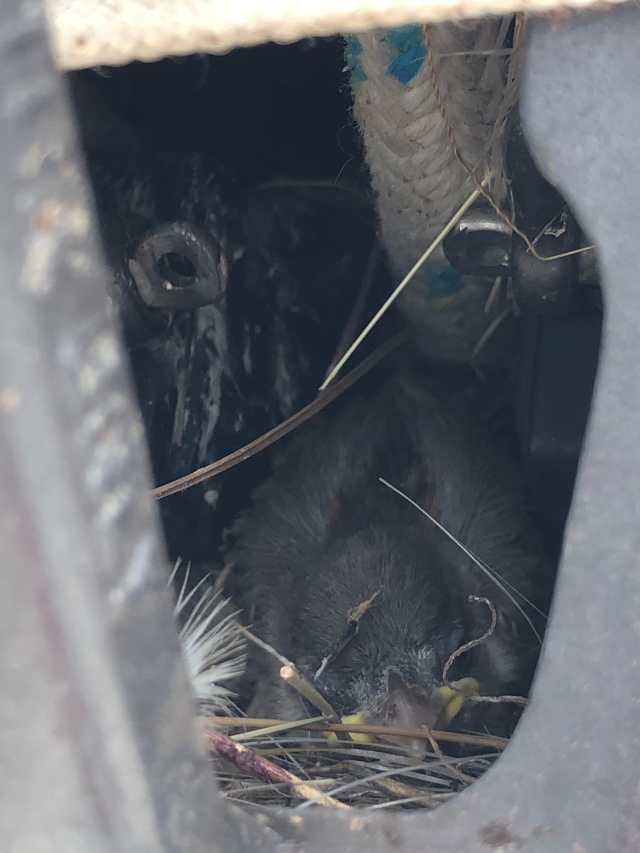 We were in a real quandary as to what to do. Luckily, on Thursday afternoon it appeared to have flown off so we were safe to launch. However, once we were on our way, we heard chirping again coming from the boom. Now, we aren’t sure whether this is a second chick or the original one but it’s joined us on our first passage of the season.

Launching was an uncomplicated affair with a low hydraulic trailer and a tractor. Twenty minutes was all it took. 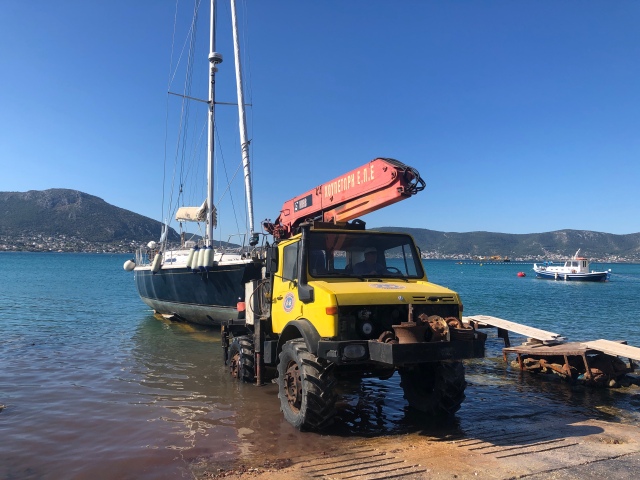 Our journey from Salamina was uneventful although we had some great wind. We decided to only use the Genoa (front sail) so as not to disturb the chick if we used the main sail so motorsailed all the way.

We are now in Palaia Epidhavros, anchored in the harbour for the next couple of days. Not sure what to do about the sparrow chick but a local sparrow must have heard it as it came to investigate once we had settled here. Hopefully, it will fly off soon. We’ll keep you posted.

3 Responses to Chicks aboard!