As you know from our last post, we found ourselves a bolt hole in Karathona Bay, near Nafplio in the Eastern Peloponnese. The winds came on Tuesday afternoon as predicted but, as a result of where we had chosen, we only saw gusts of 26 knots rather than 40. The Meltemi (north east) winds raged for three days but thankfully they eased each night. It was cold and damp with the occasional rain shower. Liz managed to get into nearby Nafplio to get fresh bread and milk on the Tuesday but otherwise we didn’t get off the boat until today (Sunday).

Waiting for bad weather is actually quite tiring. You make sure that everything is lashed down, reduce windage by taking the bimini down and ensure that you have plenty of chain out. At one point, there were only two boats in the bay and you wonder whether you’ve made the right decision. Then the storms come and you don’t move so you know you’ve chosen a good spot. By being slightly north of the winds, we reduced the impact and with the bay we reduced the swell.

On Friday, we knew we had a day of respite before the Medicane came through, except that it rained for most of the day so there was no point going ashore. We debated whether we should go further south to Porto Cheli as the winds hadn’t been as strong as forecast for the Meltemi. In the end we stayed put as we knew we were well dug in and we wouldn’t have to worry about other boats so much.

Saturday morning was eerily quiet, the real calm before the storm, and then at 1100 hours, a bit earlier than forecast, the wind started to build and build. In the end we had 10 hours of 35-40 knot gusts from the East/Northeast and torrential rain of biblical proportions – Nimmie won’t need washing down for a while! Then the winds eased a little (gusting around 30 knots) and moved around to the Northwest with the barometer starting to rise from a low of 999. (I’m not sure I’ve ever been in the Med when the barometer has been so low.) That’s when we knew the storm had passed. We had survived with no damage. However, it wasn’t the best time to have to change the gas bottle! We checked that our nearest boat was also okay and it looked like all 7 boats in the bay were fine. Despite being in a sheltered bay, we still had a very rolly sea to contend with for most of the night and it didn’t stop raining until midnight. Despite being exhausted, we set an anchor watch every two hours to check nothing had changed. 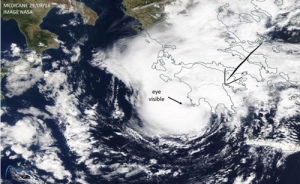 The Medicane – an arrow to mark where we were

By morning the barometer had risen to 1021 and, although it was still raining, the winds were much more manageable. We decided to head south to Porto Cheli to either go onto the town quay if there was room or anchor in the large bay. The winds were still quite strong at 20 knots but behind us so we surfed along at 7 knots for three hours or so. We managed to get one of the last remaining spaces on the quay.

Porto Cheli is in a natural harbour and so quite sheltered normally. However, we have seen at least 6 boats who have smashed their transoms (back of the boat) on the quay yesterday so they had clearly been pushed back onto the quay with some force. It vindicated our decision to stay put!

1 Response to Meltemi and Medicane