We had planned to spend two days in Fiscardo but on Wednesday morning (15th August) our very nice neighbours managed to literally pick up our anchor as they were pulling up theirs! We could have relaid ours but decided to move on instead. As it was a beautiful day with little wind, we decided to go across to the north west coast of the island to a place called Assos. The town quay has room for a handful of boats but most boats anchor in the bay and take lines ashore. We found a lovely spot and tried a new way of taking lines ashore which entailed me holding station whilst Liz paddled the kayak ashore with lines to attach. Once a suitable rock was found, Liz tied the rope around the rock and then paddled back to the boat with the line. I dropped the anchor and motored back to Liz and picked up the line. All seemed to go well.

We then jumped off the boat for a well deserved snorkel before heading into town to climb up to the ruined Venetian Fort. It was built in 1611 and would have been able to control the NW corner of the island as well as the harbour. Dinner on board before a relatively early night. 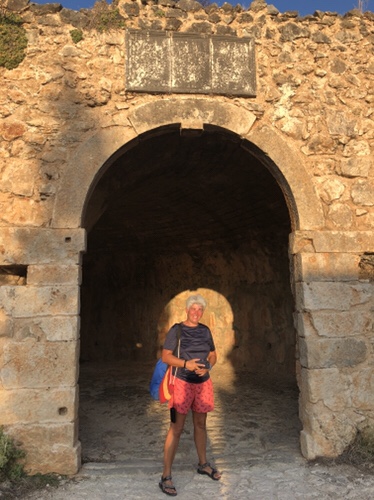 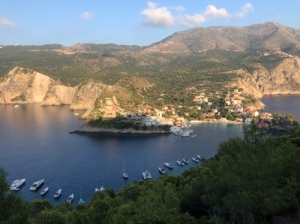 View from the Fort looking down on Assos Bay

Around 7am, it started to rain. Not much but enough to get up and close the hatches. It then started to rain more heavily and we noticed that the catamaran next to us had slipped back over our ropes. Next the thunder and lightning started. We then saw that a number of boats had dragged their anchors and were departing quickly to the safety of the bay opposite. At this point the wind was coming from the left (North) so we decided we would also get our lines in and motor forward away from the rocks. Liz jumped in to take the line off and as she did so, the wind came round 180 degrees and was blowing at somewhere between 30 and 40 knots – side on! We were then pushed onto other boats with Liz not yet back on board. Luckily, I managed to let the other line off from the boat and the kayak did a good job of being an extra fender. We could then motor forward, get the anchor up and away from danger although we managed to snarl the chain of another anchor but, with the help of our neighbours, we were able to untangle ourselves and move to the bay and anchor in relative calm. Others weren’t so lucky with at least two boats on the rocks who then needed to be towed off without too much damage. All of this happened in less than 90 mins. Needless to say we were both emotionally exhausted! We were in the bay opposite and well dug in by then so we decided to rest for the remainder of the day and leave the following morning.

So, on Friday, we continued down the western side of Cephalonia with its sweeping coastline and majestic cliffs. We saw a number of pretty bays and beaches but nothing to tempt us to stay. We also knew that the wind was going to pick up in the afternoon and were keen to get to Lixouri on the south coast. It’s set on the western side of the bay of Argostoli with the capital city of the island on the eastern side. For some reason, Lixouri is the forgotten port of the bay. It’s actually quite pretty with a town quay lined with restaurants and bars, pedestrianised streets and good shops. It was flattened in the 1953 earthquake (as was Argostoli) and the subsequent rebuilding stipulated that the buildings should only be two stories high. However, even more importantly, our friends Lisa and Rob Orme were there and in their Southerly 38, Hightime. We’d both been in the Ionian this summer but this was the first time our plans coincided. The icing on the cake was that the town quay was free and even had electricity and water! The water wasn’t great so we made sure we filled our tanks with water from the water maker before coming in.

Friday evening meant a lot of catching up over drinks on Hightime so dinner was a quick gyros in town. Saturday gave us an opportunity to reprovision the boat and wander around the shops as well as reciprocate with drinks on board. 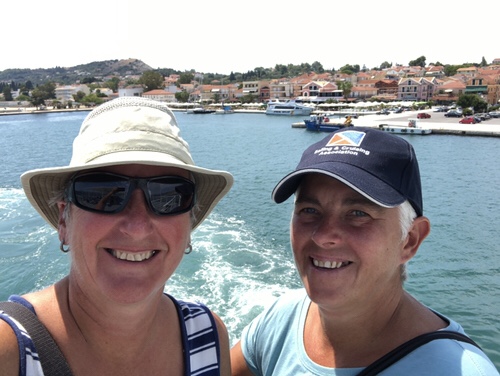 On Sunday we caught the very good and very frequent ferry from Lixouri to Argostoli. It cost the princely sum of €2.80 per person each way. If you went round by road it would take 45 minutes. Argostoli is much bigger than Lixouri with the town quay rammed with boats and others anchored off in the harbour. 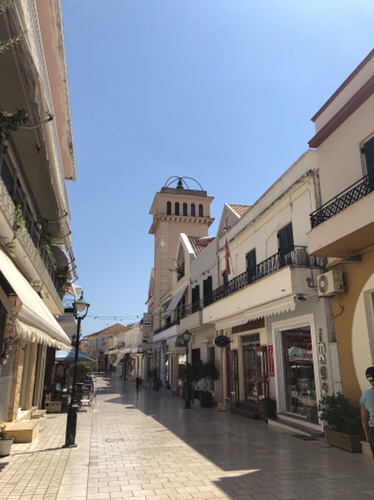 We wanted to go there to visit the bell tower and the archaeological museum (both shut!) and a museum dedicated to the Italian soldiers of the Acqui Division who were slaughtered by the Germans in 1943. The book, Captain Corelli’s Mandolin, was based on them but the museum didn’t open to 8pm. Instead, we hoped to see some loggerhead turtles that can sometimes be found in the harbour and by the causeway. 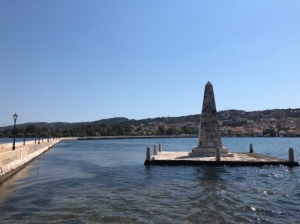 The causeway was built by Debousset in 1813 when the British ran the island. It’s the longest stone ‘bridge’ in Europe. It’s now closed to cars so makes a lovely walk to the other side of the bay. After lunch by the causeway, we wandered back towards the ferry and were honoured to see 4 different turtles, one of whom was at least a metre long and looked very old. 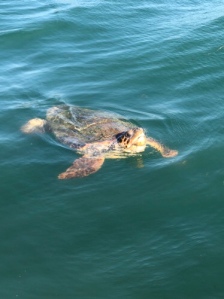 Back on board in the early evening for more drinks on Hightime before retiring. We were thinking of leaving today but with free mooring, electricity and even WiFi (courtesy of a nearby bar), we’ve decided to stay another day – we’ve all got too comfortable!