Mourtos and mooring antics part one

We left Petriti on Friday morning and made our way to Mourtos, on the mainland. There are a couple of islands there that provide good anchorages and shelter from the prevailing NW wind. For the first time since we left Italy we actually managed to sail although we did have the engine running to top all the batteries and also make some water. Having not been in a marina or on a town quay for a week, we found that we have managed to use up nearly one of our water tanks (around 250 litres).

We arrived in Mourtos around midday to find that the bay (called Middle Bay) we wanted to be in virtually empty so we anchored and then added lines ashore to keep us out of the channel between the islands. As the afternoon progressed, more and more boats arrived and anchored pretty much anywhere, including the channel so clearly no one else worried about it! The currents and back eddies running between the islands caused all sorts of commotion as no one boat sat the same as the next one so it made for an interesting spectacle. 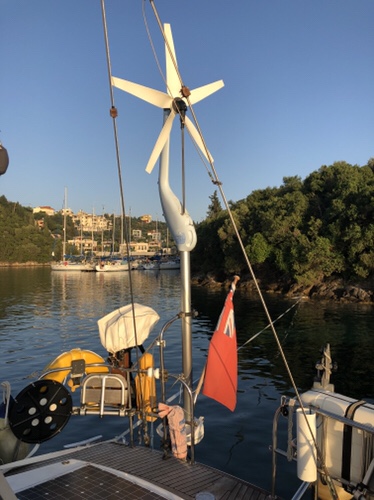 Our first evening with lines ashore at Mourtos

We decided the next morning to anchor over the other side of the channel as a strong NW wind was due in the afternoon and we didn’t want to be pushed back onto the rocks. Most of the boats from the previous evening had left so we picked a spot in shallow water that would afford us great shelter later on. Very pleased with ourselves, we dinghied over to the town and bought provisions and had a look around. Mourtos has a lovely frontage/town quay with bars and restaurants along it. We also wanted to explore the other bays so we made our way back to the boat. 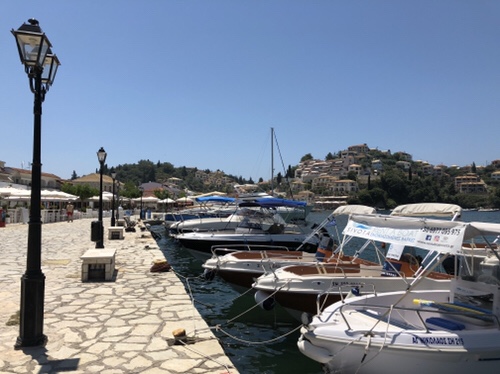 We spent the afternoon in a bay around the corner that has a sand bar running through the centre of it. Nielsen have a yachting and watersport centre on one side but you can anchor on the other and there was also a public beach. The wind was starting to get up so we thought we had better get back. More boats had come into anchor, including one we had met in Gouvia when we were getting our Greek permits. All seemed well though so we settled down to watch the England football match. Around half time, we noticed that the local rental boats were being brought over from the town quay, presumably to keep themsafe during the strong winds. They anchored them together fore and aft about 30m away from us so we weren’t too perturbed. About 30 mins into the second half, we realised that they had added more boats and by now they were getting very close and we were in danger of drifting onto them. The guys who had put them there came back and we told them in no uncertain terms that what they had done was ridiculous. Their boats weren’t going anywhere yet the rest of us were all at anchor so we were bound to swing. They were adamant that all would be fine as long as we pulled in 3m of chain. Rubbish or some such word came to mind! Because of the odd eddies and currents, we kept drifting back onto their boats so we gave up and pulled our anchor up. There was no room where we were to re-anchor so we popped round to the bay we had seen earlier (called 4th bay) but it was full. We came back to our original bay to find that someone had left so we were able to anchor. By this time it was 8.30pm and dusk was coming soon. We got settled and Liz made a wonderful dinner of stuffed squid with tomatoes, pepper and feta. In the meantime, various boats were trying to moor near us but in the high winds their anchors were either dragging or they were too close to the shore. 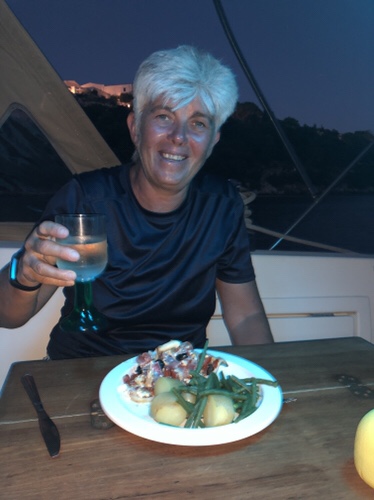 After a traumatic evening, a lovely relaxing meal

Welcome to the Ionian in summer!