Still here and will be for a while

The storms on Friday (June 15th) continued until lunchtime and so with Bari’s poor drainage systems and much of the town below sea level, it meant that all the roads were pretty much flooded. Consequently, the fridge repairman couldn’t get to us on Friday and he doesn’t work Saturdays! So, another few days until it could be fixed. An engineer came to check the electrics and confirmed that the solar panels were fine but that the batteries were knackered. We have AGM batteries that are more expensive than the usual lead acid ones but you can discharge them more deeply and they last longer. We have had them since 2011 so they have done well. They looked fine when we checked them at the end of last season but they are now overheating and one has actually blown. Unfortunately, it was, by now, Friday afternoon so although the boatyard was on the case to find replacements, we wouldn’t know much until Monday.

There have been plenty of boat jobs to be done in the meantime including cleaning Nimmie within an inch of her life and, my, was she dirty. There was an orange glow to her from months of sand and dirt in the air. Liz put a knife block in the galley. She was going to do it whilst we were on the hard then realised that we weren’t on the level. Could have ended up at a lovely, jaunty angle!

We had brought out a new dinghy that had been replaced by the manufacturer. Some of you will remember that our ‘brand new’ dinghy last year developed a faulty seam so didn’t keep losing pressure. The new Baby Nimmie IV needed her name tags and signage put on her. We have also bought a reel of webbing that you can use when needing lines ashore. This is lightweight but strong so much easier for Liz to swim with and it rolls off the reel as you need it. 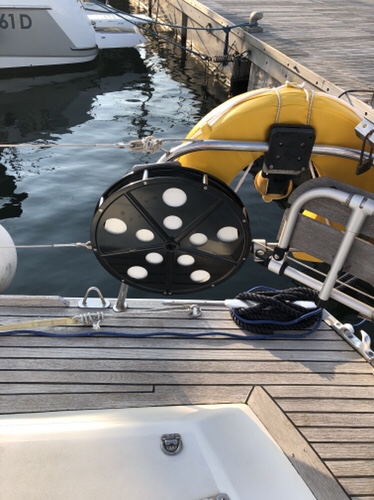 Monday morning the fridge repairman arrived and found the root cause of the problem – the probe that sends signals to the compressor as to the desired temperature. Luckily, we had a spare on board so he was able to fix it. Cost us €300 for his and his brother’s time (on Thursday) but it is working now and frankly, the thought of not having a working fridge all summer was too much to bear.

It’s always amazing how much time things take when you are on a boat and also what can go wrong on an almost daily basis. The latest is that the water pump wouldn’t switch off. We thought it was a drop of pressure in the accumulator so wasn’t hard to fix but it meant emptying the entire cockpit locker to get to it. We took the opportunity to have a look at the heating system as well given we had problems in March. I’m not sure it was the best time to do it given it was 31 degrees today! 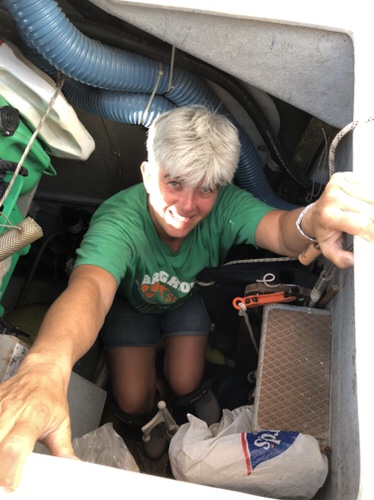 The locker really is deeper than Liz is tall! 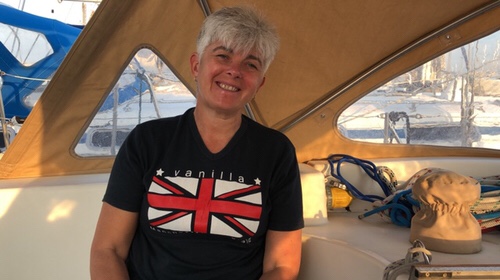 At least with being here we were able to watch the England game in the Football World Cup. Even Liz got into it.

The update on the batteries is that the ones we want are hard to source here so we have ordered them from the U.K. but they will take 5 or 6 days to get to us once dispatched. I reckon that means that we won’t be leaving Bari for another week at least. It seems that we are destined to spend this time of year waiting for repairs. In 2012 it was the engine, last year the gear box and now the batteries. Still, at least it’s warm, sunny and we aren’t at work!

4 Responses to Still here and will be for a while