All going to plan…

Brand new Coppercoat on the hull

On Thursday March 22, we flew out to Bari to check on the work that the boatyard, Nautica Ranieri, has been doing on Nimmie. We had given them a long list in October but didn’t expect them to have completed all of it by now! Not only that but they had also done all of the extra items that were added along the way. The largest job was to re-apply the Coppercoat on the hull to keep barnacles and other horrid things from growing. This was first put on some 8 years ago but we felt that it hasn’t been working that well over the last two years. On some sailing forums, they say that Coppercoat only works for around 6 years in the Med rather than the 10 years plus in cooler climes. We decided to reapply it and see how it goes. If it doesn’t work that well, we will probably revert back to good old antifoul.

We had decided to stay in an apartment for the four days we were there rather than on the boat. I’m glad we did as it was very wet and cold for most of our stay. We even started up the heating whilst we were on board but the smell and smoke in the saloon was horrible. It may just have needed to be burnt off or there may have been a split in the exhaust hose, either way it would have meant taking everything out of the cockpit locker to get to where the heating is housed. A job for another day when it’s warm and dry! The apartment itself was midway between the old historical centre and the marina so, apart from the first day when we had a stand up paddle board (don’t ask) with us, we were able to walk there.

On the Friday evening, we went back to one of our favourite restaurants, Pappa. It is in the historical centre and we had assumed we wouldn’t get in without a reservation. However, when we arrived, we were the only ones there. The waiter said it was because of ‘il tempo’ – the weather. It was true that there weren’t many people out and about and I suspect that southern Italy doesn’t normally have such cold weather even in mid winter. They had changed the menu from full meals to tapas with a twist. The calamari, squid and bread croquettes were just heavenly. Washed down with a bottle of house wine at €15, the whole experience was a culinary delight for around €20 per head. Let’s hope they get more custom in the summer otherwise I suspect they will have to close. 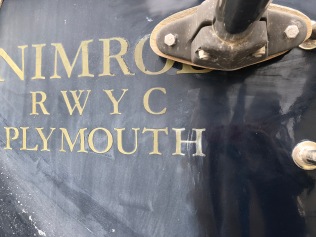 Saturday was dry and relatively warm whilst the sun was out so we were able to undertake some minor jobs including trying to remove the effects of oxidation (whitening) on the stern by using a rubbing compound. It’s like an industrial version of T-Cut on cars (although T-Cut is oil based and rubbing compound is like liquid sandpaper). It did seem to make a big difference so we will try and finish the rest of the hull when we are back out in June if we can. One of the joys of having a blue hulled boat in very sunny climate. It’s difficult in Italy doing jobs on your own boat as the boatyards tend to forbid it so you have to be a bit creative! The boatyard shut at 1pm but we stayed until around 4pm to do the stern and then made our way back to the apartment for a hot shower. This time we went to eat at a renowned local pizzeria. It is very popular takeaway with locals (always a good sign) and has a small side room with four tables in it if you want to eat in. The pizzas were delicious although we weren’t too sure of the house specialty of broccoli and salami. However, beer and pizza for two came to €20 so we weren’t complaining.

Sunday was forecast to be another damp day so instead of wandering around Bari, we decided to take the train to Monopoli, 30 minutes south of Bari. It is an old fortified town with an exhibition of Joan Miró paintings in its castle. We went to the house of Joan Miró in Mallorca back in 2012, so we were keen to have another look at his work. The train fare was €3.40 each way and the entrance fee to the exhibition was €4. I know, last of the big spenders. We even found a lovely little café that was run by a local Italian woman who had spent many years in Middlesborough and had a strong NE accent! Monopoli is small but quite lovely with marbled streets and alleyways. By 3pm we had seen pretty much all there was to see and the weather didn’t improve so we made our way back to Bari and onto the airport. It was lovely to be back in Italy again and also to see that Nimmie was faring well. We can’t wait to be back on her for real in June to start another adventure. 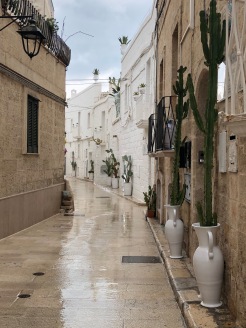 Monopoli street after one of the many deluges

Like Loading...
This entry was posted in News and tagged 2018, Adriatic, Italy, Maintenance, Med. Bookmark the permalink.

2 Responses to All going to plan…