Time to say goodbye – for a while at least

The crossing from Montenegro to Bari, Italy was completely uneventful. 21 hours of very little wind and calm seas meant we had to motor the entire way. There wasn’t even much traffic until we got closer to the Italian coast so it was a very easy passage. We arrived on Tuesday, October 3rd around 0830, refuelled and reversed into our berth. Although both of us were tired from our crossing, having only had a few hours sleep each, we needed to make the most of the weather and get the jobs done that were easier to do whilst she was in the water and before the afternoon sea breeze arrived. This entailed washing the boat, dinghy and kayak so we could deflate and pack them away – obviously not the boat! We also needed to take the genoa down before lifting as sails can get unfurled and damaged in high winds, as we saw a few days later with another yacht. We then washed all the lines we could as they had been covered in salt over the last 5 months and 2,100nm. 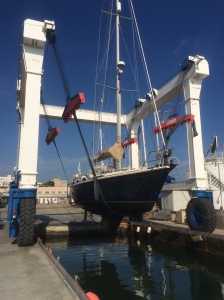 We were like anxious parents watching her being lifted out!

The next morning saw Nimmie being lifted out. The yard took great care of her as she was being lifted, washed and then put into her cradle. It probably took the best part of 3 hours. Luckily, the boatyard has a ‘lounge’ area with good wifi so we could keep an eye on her whilst catching up with admin.

Once she was safely on her stand, we decided to explore the shoreline near the marina. It is quite pretty with a number of restaurants, one of which we decided to have a late lunch in. This is where Liz had sea urchins for the first, and probably last, time.  They tasted a bit like oysters but not quite! We also came across Eataly, a sort of Harvey Nicholls Food Hall, that showcased food from Puglia. Lovely stuff on show but very expensive.

Over the next couple of days, we continued to get Nimrod ready for the winter as we have done these past 5 years, including removing anything that may be damaged over the coming months. It’s amazing how long it all takes. We were able to stay on board as the yard had lent us a ladder so we could get up and down. On Thursday, the chief technician came to discuss the jobs we wanted doing. Most of them fairly minor but we had noticed that one of the propeller blades was loose and he also noticed that the cutlass bearings had gone, which means that the propeller shaft itself could move from side to side – neither a good thing! 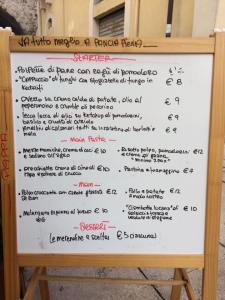 The menu at Pappa’s

We had hoped for a day off to just chill but the most we managed was a few hours in the old part of Bari. We did find an amazing restaurant called Pappas for lunch, tucked down a side street. It has only been open for a few months and wasn’t very busy but the food melted in your mouth.

We reluctantly left Nimmie on Saturday morning, 7th October to fly back to the UK. Hopefully, she will be well looked after in Nautic Ranieri. We’ve had a marvellous time over the last 5 months and it’s funny how quickly you get back into a live aboard routine. Nimmie has looked after us in some pretty nasty weather, bits have stopped working (windlass) and started again (fridge). It never seems to matter what is thrown at her, she just shrugs her metaphorical shoulders and gets on with it. We’ve had many compliments about her as we toured the Adriatic as she is seen as a ‘proper’ boat with a number of harbourmasters nodding sagely when they see her. We are going to miss her but are looking forward to the next adventure in 2018!

Like Loading...
This entry was posted in News and tagged 2017, Adriatic, Italy, Maintenance, Med. Bookmark the permalink.