In Malta for a few more days…

The original plan was to leave Malta tomorrow (Sunday) to take advantage of favourable winds and sail north to Syracuse in Sicily. However, the jobs list, whilst significantly smaller, is not yet complete and the shops we need aren’t open again until Monday.

We’ve spent the last two days continuing to get Nimrod ready. The 70m of new chain was duly delivered and had to be measured and marked so we know how much chain we are putting out when we do anchor. We did a large supermarket shop, which they kindly delivered. We walked miles between shops, chandleries and the marina. We also paid the marina for the extra nights we are staying over and above our contract. They gave us a very generous discount by calculating our extra nights as if we had a summer contract with them so it meant we paid less than half the daily rate.

Someone once said that boat jobs always take at least twice the time you think they will but I reckon that it’s three times. A case in point is the electrical socket below. It sits very close to where the speed log is and we pull the log out each time we leave the boat so that it doesn’t get clogged up with barnacles etc. Over the years, water must have been splashed onto it and you can see that it’s looking a mess. No problem, we thought, we’d just replace it and duly brought one over from the UK. Should take 5 minutes. Trouble was that the new one has a different arrangement behind the front plate and doesn’t fit in the hole in the wood panel! So, instead Jo spend an hour cleaning the old one up and putting the new one back in its packaging.

We decided we would host a get together of any members of the Cruising Association who were in Malta by putting an email out to the Med section. There were 7 of us in total although two couldn’t make the actual dinner or drinks beforehand on Nimmie but they did meet us at The Royal Malta Yacht Club after we’d finished eating. It turns out that most of us are making our way to Croatia this season so it was good to swap plans. A lovely evening was had and the walk home took all of 3 minutes for us!

Having decided on Saturday morning that we would delay our departure, the pressure was off a bit. There is a blow coming through Monday so it will probably be either Tuesday afternoon or Wednesday morning depending if the sea has died down by then. Having spent Sat morning doing admin, we indulged Liz as she wanted to go to a large DIY store in Birkirkara, which entailed two buses and a yomp through an industrial estate and past the Cisk (pronounced Chisk) brewery. 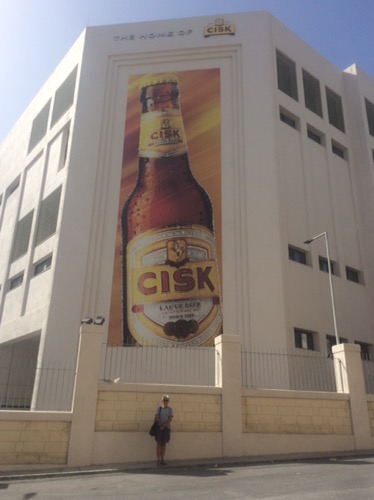 We decided to walk back as it was less than an hour and was better for us than getting the bus.  On the way we even found a Lidl – good to know when you’re just about to leave a place! We also went through some lovely residential areas.

Finished the day off with a Pimms sitting in the hammocks. Lovely.