Sunday, September 12th arrived with a clear blue sky and temperatures on the high 20s by 9am. Loui and Kate were due to land around 10.40am having got up at stupid o’clock to fly from Gatwick to Malta. They arrived at the boat around midday with their luggage and, more importantly, duty free allowance! We then had some lunch together before sitting down and deciding what we all wanted to do for the week they would be with us.

We decided to make a run for the Aeolian Islands off the north Coast of Sicily as we hadn’t actually made it there yet and it may be our last chance. This would mean a 24 hour sail to Taormina and then a dash up the Messina Straits before making our way over to the islands. We had an early night as they were tired but not before a spectacular meal at our favourite restaurant, Rampila, in Valletta. However, we were distraught that not only had the bus company put up prices to €2 but that was one way! No longer the €1.50 all day ticket. We had also fixed the AIS so that we could monitor other ships more easily whilst night sailing.

Monday morning (September 13th) the forecast was for light winds all week so it would mean motor sailing the entire way. Just as we were finishing lunch, we heard a ping and the mainsail dropped into the stack pack – very neatly I might add – with the halyard left at the top of the mast! Lunch hastily cleared away, we attached the topping lift (keeps the boom up when the mainsail is down) and used it as the main halyard. Kate spotted that we had a boom brake that is usually used when you need to take the main sheet off when the sails are down over winter. As there was a bit of swell, we decided we would retrieve the broken halyard when we were in the safety of Taormina Bay.

The next 21 hours were uneventful apart from the fact that it was the longest single journey for our crew. The watch system worked well with Kate and Loui sharing their watch with one of us. We had checked the weather forecast once we reached the tip of Sicily and there was a strong wind warning for during the night. We didn’t really believe it but put in two reefs all the same. Luckily we did as it did blow up for several hours in the middle of the night.

The swell forecast was supposed to be none existent where we were moored but it was rolling straight into the bay so made sleeping hard even though I had been up for 6 hours by then. Liz and I got up and decided to try to secure us to another mooring buoy from the stern (back of the boat) but first we had to inflate the dinghy as quietly as possible as K&L were fast asleep. Even after tying two long ropes together, we were short by at least 20 metres. We decided to go for a swim instead as the water was warm and absolutely clear. At that point, George (who owns the mooring buoys) turned up and suggested a different buoy to moor to as we could then attach ourselves to one astern of us. By this point it was too late to go back to bed. 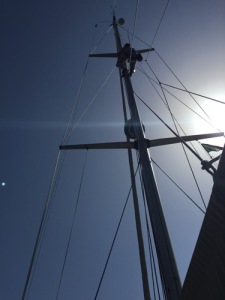 After brunch, we decided we needed to see whether the main halyard was still at the top of the mast or had dropped down into the middle of it. Loui offered to go up as she hadn’t done it before and found that the halyard was still there but the shackle had sheared so she brought it back down and we replaced the shackle. After all that exertion another dip in the sea was required and now with the stern rope attached, we could hang onto it and not get swept away by quite a strong current.

We wanted to explore the town so we took the dinghy to a small marina nearby so that we could catch a bus or taxi – whichever came first. It was a taxi that took us all the way into town as the cable car wasn’t running due to damage, which was a real shame as the views from it are stunning as you climb from the shoreline to the town itself.

Kate and Loui had a quick wander round the Greek amphitheatre before joining us for cocktails at the Grande Hotel Timeo that has stunning views over the bay. Dinner was had in town with a gelato to finish off the evening. We were all very tired by then so an early night beckoned. Another glorious day in the Med though.

Like Loading...
This entry was posted in Equipment, News and tagged 2015, Equipment, Maintenance, Malta, Med. Bookmark the permalink.