We are now back in the UK after a lovely few days in Malta. First thing on Easter Monday was spent with Peter, our caretaker, as there was a list of jobs that required his attention. One of them he had pointed out as another boat he is looking after had a similar fault and ended up exploding! Apparently, the switch for the domestic battery bank had become hot, sparked and set fire to the spinnaker sail that was being stored over the batteries. Luckily, we don’t store anything over our batteries or battery switches (seems a bit daft to me) but he did notice that the switch was getting very warm and therefore needs replacing. We switch everything off when we leave the boat so it couldn’t spark but we felt it was better to be safe than sorry so he is replacing the switch in the next few days.

Afterwards, we ventured back into Valletta and were, yet again, incredibly lucky in finding a parking space (they are like gold dust!). We wanted to show John and Ruth the Co-cathedral of St John and this was the first day it would be open to visitors rather than church services since we arrived. It was still as spectacular as ever in its amazing splendour and grandeur.  Photos really do not do it justice. The artisans who built and decorated this church were indeed masters of their craft.

The pulpit at Co-Cathedral, Valletta

We then had lunch in one of the oldest cafes in Valletta, Caffe Gordino, before catching the Grand Master’s Palace and Armoury before they closed. The Palace was, frankly, a waste of time but the Armoury was quite interesting. It holds one of the most comprehensive collections of armour and medieval weaponry in Europe and chronicles the advancement of the technology involved. 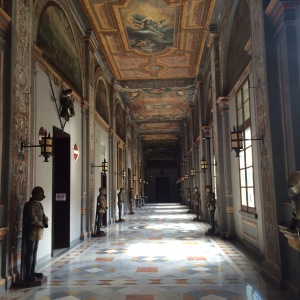 After that, we dropped John and Ruth back at their hotel so we could leave the car at the marina and walk back to meet them for a meal later. This meant that Jo could have more than one glass of wine! However, first we went via the supermarket to top up our alcohol stock as we were running dangerously low on beer and wine. Both being heavy to carry back to the boat without a car if we left it until we returned next month.

After a lovely dinner at their hotel, courtesy of John,  we came back to the boat and managed to get the wifi going at last. We had bought a “red box” at the London Boat Show that creates a wifi router inside the boat and you can choose how you want to get the signal – wifi, 3G, satellite etc. We had managed to find some free wifi near the yacht club as well as get the code from the yacht club itself but hadn’t managed to get it to work. However, we rigged up the antenna as high as we could and, hey presto, we could log onto it. This made us very happy as this means that we should have access every time we are in the marina now. Hopefully, we will be able to pick up other hotspots as we travel round the island in May.

Tuesday was our last day in Malta and we decided to go to Mosta to see the famous dome. It is the 3rd largest unsupported cupola in Europe and also survived a bombing raid in 1942 when a bomb came through the roof during a church service but amazingly didn’t explode. However, there isn’t much more to see in Mosta so we went onto Mdina to try and see the cathedral there as it wasn’t open to visitors on Sunday when we were there last. I suspect that we would have been impressed if we hadn’t seen either St John’s in Valletta or the dome in Mosta! Still, we had a nice lunch on the ramparts under lemon trees as a final meal of the trip. Then onto the airport to drop the car off and check in.

The dome extrior at Mosta

We seemed to have packed a lot into a few days but can’t wait to be back out again in just over 5 weeks time when we will be taking Nimmie out for a first sail of the season.

2 Responses to Domes and bombs