We ended up motoring the whole 160nm to Ponza in the Pontine Islands off the Italian mainland. It was dead calm so a very easy, if expensive, run. With 4 of us on board, the watch system was pretty simple and we soon got into the groove of reading, sun bathing and keeping a look out for ships – not that there were many of them! We arrived at a lovely bay called Chaia de Luna at 0530, anchored safely into sand and slept soundly for a few hours. We awoke to turquoise waters but a beach that had been cordoned off as they were worried about landslides.

We motored around the island which is volcanic with very dramatic cliff faces to Ponza Harbour where we managed to find a spot to anchor in just outside of the town. The town has been occupied since Roman times and some of the houses look like that was the last time they were painted! We arrived around 1300 so decided to have a leisurely lunch and afternoon as none of the shops would be open until at least 1600. At 1700 we went into town to mooch around but you could tell it was the end of season as many of the shops and restaurants were closed. We found one that looked nice and had a good review in Trip Advisor so had an early dinner after a quick beer in a local bar. We are leaving at around 0300 to get to Formia in the mainland ahead of a bit of a blow that is due. 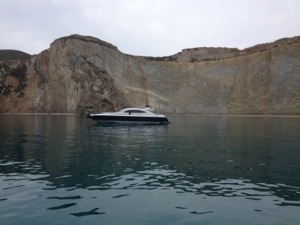 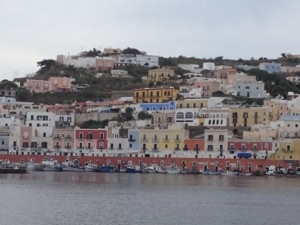 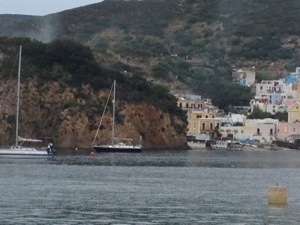