On Friday morning we had a short sail to Playa des Salinas on the southern tip of Ibiza. It is a protected area so they have laid mooring buoys as you can’t anchor in the sea grass. To book the buoy, you need to register online and once confirmed you are given the number of the allocated buoy. Needless to say, when we arrived another boat was on our buoy but we were redirected to another one that was not as close to the beach but there was not much we could do about it. The water was not as clear as Formentera but still refreshing and clean. There were plenty of bars along the beach, each with their own music blaring out but that all stopped around 10pm.

Friday night or we should say, Saturday morning, was crew change as Lee and Jase had to fly back to London and Mac and Ketan were flying out for the weekend. So, at 0100 we got into the dinghy to motor to the deserted shoreline to await them being dropped off by the taxi. It all went to plan although it must have looked a bit odd when they took their trousers off on the beach so that they could wade to the dinghy! Later that morning Lee and Jase were dropped off on the same beach to pick up a taxi to the airport. Nimrod then made her way to Sant Antoni on the western side of Ibiza as it was due to blow quite hard for the next few days from the west. Being in Sant Antoni should provide us with protection from both the wind and the swell.

Sant Antoni is set in a big bay with room for at least 50 yachts at anchor but it was quite crowded when we arrived so choice was limited. It seemed that everyone was having difficulty getting the anchor to hold as it is very weedy here but eventually it set and we knew we were dug in as it was blowing over 15 knots and we didn’t move!

We went in search of food on Sat eve and were not disappointed. We found an authentic Spanish restaurant off the main tourist area where we had great tapas and were entertained by an amazing dancer on stilts. Sat night is a big party night here as there are literally thousands of young people out to have a good time so the beach turned into a giant night club until the early hours of the morning. Not what some yachts people would approve of but good fun nevertheless, especially as we took the dinghy over. Not sure I’ve been to a night club by dinghy before!

Sunday morning was a very lazy affair as it had been a late night. We all then went into Ibiza Town for the afternoon. There are regular buses from here that only cost a couple of euros. Ibiza Town is actually quite nice with good restaurants and the old town itself is very quaint with cobbled streets, little bars and restaurants as well as the old fort with commanding views of the harbour. We had a great paella together before Mac and Ketan left for the airport and we jumped on a bus back to the boat. The dinghy was still at the dinghy dock and in less than an hour of leaving Ibiza Town we were back on the boat having a wee dram before bedtime.

We will stay in Sant Antoni for a couple more days to re-provision and clean the boat after our visitors and the crossing from Gibraltar. It is lovely that people make the effort to come and see us – especially when we can’t give much notice as to where we might be.

Photos of us with Jase and Lee at Salinas, the amazing street entertainer on stilts, partying on the beach and Liz in the old part of Ibiza Town. 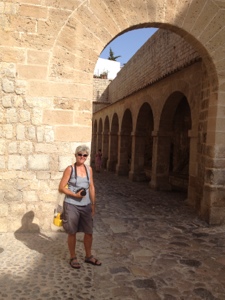 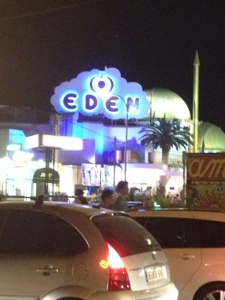 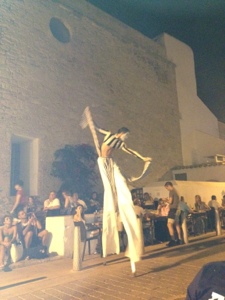