We are now at the eastern most part of Portugal on the Rio Guadiana. One side of the river is Portuguese, the other Spanish. We are anchored on the Portuguese side but only by 100m or so! It is the most peaceful anchorage we have been at. Not a soul to be seen or heard. The wind has died and the only sounds are from the many varieties of birds that nest along the shore.

We left the marshes of Faro this morning in much nicer weather than when we arrived yesterday. It still felt very exposed but was a large anchorage with over 50 boats and the anchor held firm in 20 plus knots of wind. The wind and swell made for a bumpy night but we slept pretty well until the fishing boats came through the anchorage at dawn and the airport opened at 0700 – we were directly under the flight path!

Before we left Liz had made bread which then proved in the engine compartment as we made our way out at 1000. The wind was behind us so we didn’t have enough to sail with until early afternoon. We got to Rio Guadiana too early as it has a shallow entrance and we arrived at low water so decided to wait an hour before going in. Liz took the opportunity to fish but without success. It was a bumpy ride through the entrance as the wind was now over 20 knots and the swell had also picked up. Once through, the water calmed and it was a pleasant run up the river under the suspension bridge (with all of 3m to spare) to find our anchorage for the night. 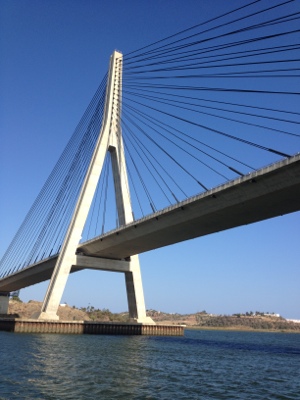