We left Cavtat in Croatia last Monday, September 25 after pulling up the anchor and motoring round to the customs quay. There were a number of charter boats already there but they seemed to be taking an inordinate amount of time. We asked if we could raft off the two catamarans that were moored alongside as checking out should only take a few minutes. Also, it meant we didn’t have to deploy our anchor (and Liz pulling it up by hand!). However,  the harbourmaster was ‘busy’ so we had  to go back to the boat to let the others leave. We hovered in the harbour waiting for them to go but finally gave up when the last one was still there 20 mins later. We dropped the anchor and motored back to the quay. They decided to leave at this point and it soon became clear that we had crossed over their anchor chain as they had deployed theirs at 45 degrees away from the front of the boat rather than in front. The Port Authority guy shrugged his shoulders and said ‘Polish’ as if that explained it all. It all got sorted but the wind had got up so we ended up at a jaunty angle thanks to our new friends, now called the numpties. The Port Authority mooring guy was impressed that two women could handle a boat – a first for him. Bless. The checking out only took ten minutes so by 1130 we were on our way to Montenegro.

The wind was on the nose – as usual –  so we had to motorsail to Tivat, some 25 miles away. We decided to check in at Porto Montenegro marina as they handle all the paperwork. Montenegro seemed to be even more bureaucratic than Croatia with visits to the police, harbourmaster, customs and back to the police. Amazingly, it only took 20  minutes and we then went round to the marina as an indulgence (€82 per night to moor). It is an upmarket marina with superyachts galore but very welcoming to us mere sailors.

The next morning we popped round to the Maritime Museum by the marina and it included a really interesting visit around a Yugoslav submarine. (Liz has an obsession with submarine pens and submarines.) 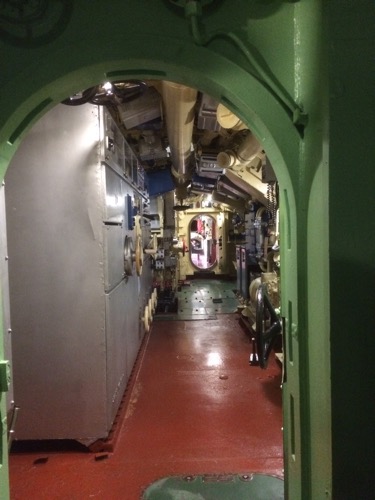 Given how large it looked outside, it was amazingly cramped inside for the 28 sailors 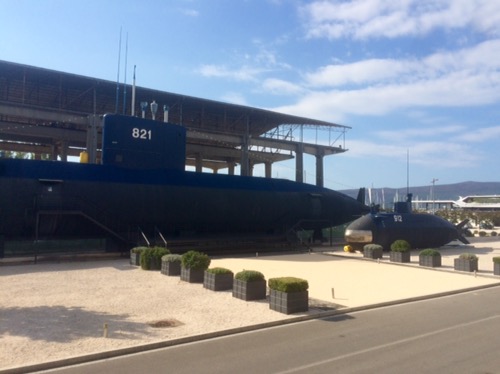 We decided to stay in the Bay of Kotor for the first few days as we had heard that the bay was spectacular. It does have a feel of a Norwegian fjord with small villages dotted around the waterline dwarfed by the mountains. We went to Risan and moored up on a town quay, although it was very shallow and not exactly pristine.  Still, it was free even if the locals use the quay as a meeting place until 2am! The only bright moment was the local Roman mosaics.

The following morning (Weds) we caught a bus to nearby Perast, which sits on the shores of the bay.  A lovely little town but, like most of Montenegro, clearly showing signs of being at the end of the summer season.

Perast on the shores of the Bay of Kotor

The yacht charter companies are still operating in October so we decided to go to Kotor mid week when it shouldn’t be too busy. Kotor is a medieval town with a city wall that reaches up to the mountain behind. As we approached, we saw that the cruise liner, Queen Victoria, was moored on the quay.

Kotor itself dates back to the Greeks but the current town was built by the Venetians and you can tell. Both of us preferred Split or Dubrovnik as the old town was full of tacky souvenir shops, which was a shame. However, the climb up the city walls gave fantastic views down into the harbour and across the bay. The weather by now had turned so it has been decently chilly in the evening and the wind has definitely cooled during the day. Still around 21/22 degrees in the shade and a lot more cloud cover but that could be as a result of the majestic mountains that surround you in the bay. We decided to eat out that evening and had a lovely meal at Galion restaurant overlooking the bay (and Nimmie).

The weather forecast wasn’t great for Thursday so instead of exploring the beaches (and beach bars!), we sailed to Herceg Novi as it has been recommended by friends and is close to the mouth of the bay. We thought it would be an industrial harbour. How wrong could we be. It is a delightful town with nice shops, lovely bars and cafes around the promontory and an old town that was a joy to walk round and gave fantastic views down the bay. The only downside was that mooring the boat was challenging as we had a strong breeze pushing us sideways so we gently ferry glided in slowly and carefully. It seems that both harbourmaster and the other yachts were impressed! We ended up between two Irish charter boats – as you can imagine, they were great fun. Then the Polish mini flotilla (aka numpties) arrived. Luckily, they were not next to us otherwise words might have been exchanged!

We went into the old town (Starigrad), which involved a long climb but well worth it for the views and also the tasteful shops. On the way back we also walked around the promontory which reminded us of the one at Bol on Brač with its kiosks and cafes. We found a mobile phone shop that sold a 200GB data SIM card for €5 as Montenegro isn’t part of the EU and therefore the roaming changes don’t apply here. Bargain!

By Friday, Liz was getting itchy feet and keen to explore the numerous beaches along the coast so we headed out of the bay and went exploring. We ended up at Sveti Stefan which is a hamlet on another promontory although now it is an exclusive hotel complex where they charge €1000 a night for a room. We anchored underneath the complex with the much better view! The wind was double what had been forecast so we had a pretty disturbed night checking all was well. The next day we went ashore and found a lovely walk. 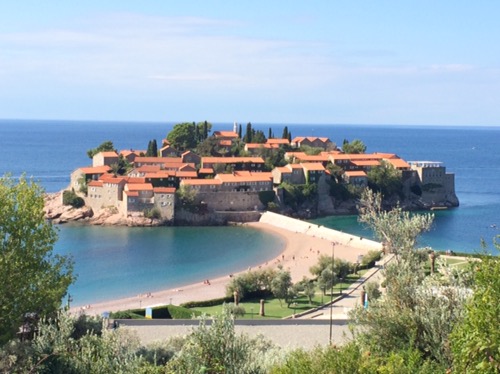 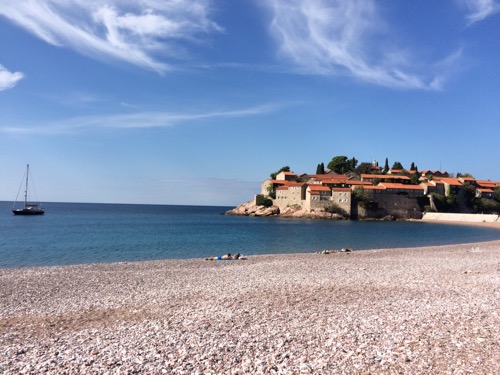 Back at the boat we headed north towards the Bay of Kotor as we needed to check out on Monday. Our vignette (cruising tax) was only valid for 7 days. The various beaches didn’t look terribly sheltered or inviting in the overcast sky so we continued to Bigova, half way between Sveti Stefan and the Kotor Bay. It is a lovely inlet that is very sheltered and there are mooring buoys available if you eat at the Grispolis restaurant. We had already decided that we would eat out so we had a free mooring for the night. 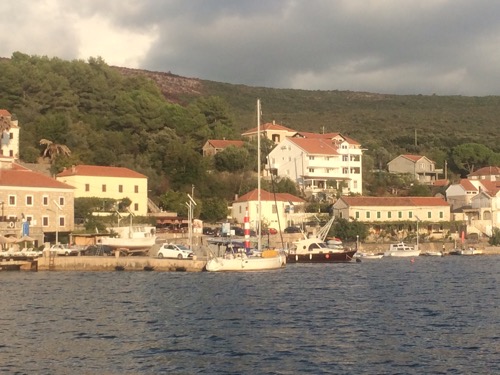 View of Bigova from our mooring buoy

Given that we had reserved a slot at the duty free fuel berth at Tivat on Monday morning, we wanted to be relatively close by. We found another lovely bay just before the Bay of Kotor called Zanjica that also had mooring buoys. We told the lad that came to help us that we didn’t want to eat out that night so, once he confirmed with his boss, we got a free mooring for the night. We just said we would go and have a drink at the bar. The restaurant was really a beach lounge/bar/restaurant so we had gin and tonics watching the sunset set with chill out music playing. What a lovely way to spend our last night in Montenegro.

Next morning we were up bright and early to go round to duty free fuel berth. We filled up with 170 litres for €92, which is the same amount we paid in Italy for 60 litres!! They also dealt with checking out so by 1130  we were on our way over to Bari, Italy – some 113nm and 21 hours later.

Like Loading...
This entry was posted in News and tagged 2017, Adriatic, Med, Montenegro, Roman. Bookmark the permalink.